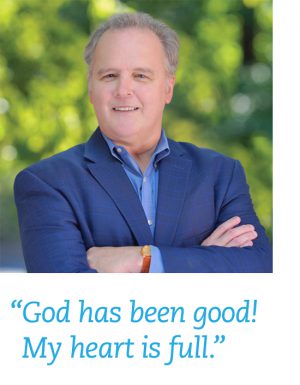 “I simply cannot believe that I stand at this moment in time. I was blessed across my career to work at six different BGAV churches for nearly twenty years and then for twenty-five years at a ministry that builds a bridge to tomorrow for Christian believers. God has been good! My heart is full,” said Hall.

Since 1923, EverBless has worked to move the mission of the church forward. Believing that Christian generosity grows more followers of Christ, EverBless seeks to encourage and strengthen stewardship through both estate planning and money management.

According to board chair James Wilkerson, “Ron has used his giftedness with people to bring EverBless into a new and exciting phase. His passion for encouraging individuals to support the ministries of their local church through planned giving will have an immeasurable impact.”

During his tenure as president and CEO, EverBless assets under management increased to $225 million.

In his retirement, Hall plans to write a book of sermons and delve into his hobby of classic cars. He looks forward to spending more time with his wife, Celeste, as well as his children and grandchildren.

The board has appointed the current Chief Financial Officer Todd J. Fuller as the acting CEO.